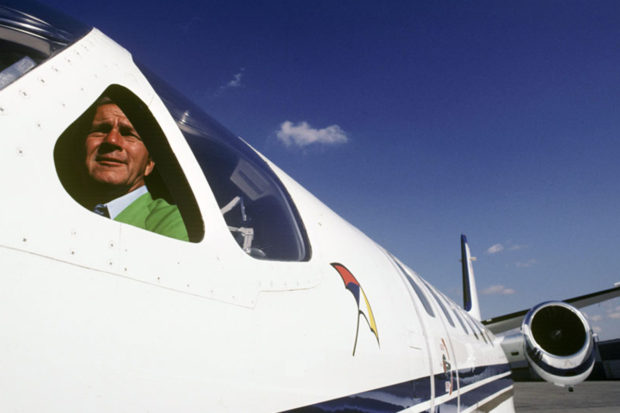 At Arnold’s public memorial service in Latrobe, Big Jack talked about flying through a West Texas windstorm, seat-belted and terrified, while the pilot, Arnold Palmer himself, was having a grand time. Of course he was. Arnold in the air. Close your eyes and see the grin.

It is only a coincidence that Arnold’s ball flight with the driver, in his persimmon-and-balata prime, closely resembled a jet fighter taking off from an aircraft carrier: low and fast, low and fast, then, whoosh, the sudden climb. They don’t fly “em like that anymore.

Nicklaus remembers the times when Arnold would fly from Latrobe to Columbus, solo in a single-engine prop, pick him up and head off somewhere to play an exhibition for quick and easy cash, $2,000 per man, something like that. The next day, they’d get back in the plane and do it again. Detroit. Tulsa. San Antone. A picture of manly do-it-yourself independence, isn’t it?

It was the 1960s. The world had gone mad—assassinations, war (Cold and otherwise), rioting. But up in the clouds were our two golfing heroes, partners and rivals and friends, Brylcreem in their hair, their golf bags on the back seat, flying all around this vast and beautiful country, so rich with opportunity, the gray ribbons of the Eisenhower Interstate Highway System below them. They logged hundreds of miles together on courses all over the world, but that number is dwarfed by the air miles they shared.